"This is the time for small pay checks and  big memories."
-Jessy Tapper


Friday, July 31st: Well I thought I'd start by informing all of our curious readers that I lost at banana-grams last night. Even with such great words as umgcibelo and emabhontjisi, Simiso proved that I have not yet mastered siSwati like she has mastered English. Not to worry, Michael Jordan didn't give up after being cut from his high school team, and neither shall I. I will find a way to be victorious despite the ominous lack of r’s and q’s in the siSwati language. Now, on to today, or rather, the thoughts of tomorrow. Awaiting us tomorrow is the hallowed site announcement ceremony! In the past such notable figures as Dumbledore and King Robert Baratheon have graced us lowly PSTs with their presence and doled out houses of their choosing. It's always a grand affair and tomorrow will be no different. We anxiously await the decision of whatever esteemed councilors the Peace Corps has chosen to consult, knowing absolutely nothing of where we might end up for the next two years. Yes, tomorrow is a big day, and Grace and I are both eager to learn where we are headed and sad to remember that we must leave the Shabangu's behind. It's also befuddling to think that this somewhat randomly chosen village will be our new home for the next two years, considerably longer than we have ever stayed together in one place in America. We remain tremendously excited for the opportunity that awaits however, and we can not wait to assess our new community  home and begin planning projects. We want to help and we have wanted this, both individually and together as a couple, for a long time now. We are doing  what our hearts have beckoned us to do, and despite having a vast network of loving homes back in America, our home is now where are hearts are, Africa. Our home is Swaziland. Tomorrow, we’ll find out exactly which home here will capture our hearts for the next two years.

Saturday, August 1st: I don't even know where to begin. Wow, what a day it has been! Of course we started off with language, and of course we could not concentrate. Thishela, being a pro Peace Corp LCF, knew that nothing would get accomplished, so we had a review day. The bus ride to SIMPA was stirring with nerves. We even forgot to go eat cookies in our break room, someone had to bring them to us. These Americans can sure eat some cookies. Like Sean said previously, the current group of PCVs in country run the entire permanent site matching day. The theme they choose this year was The Avengers and it was oh so well done! If you haven't seen The Avengers you might not understand the next few sentences. Do not fear, call my brother John, he is an expert and can explain. There are 4 regions in Swaziland, Hhohho, Shiselweni, Lubombo, and Manzini. Super heroes (PCVs currently working in those regions) were assigned as following; Iron Man, Thor, Hulk, and Captain America. Shield was there with approximately 10 agents who called us up individually and “interviewed us” for the job that awaits as a PCV. 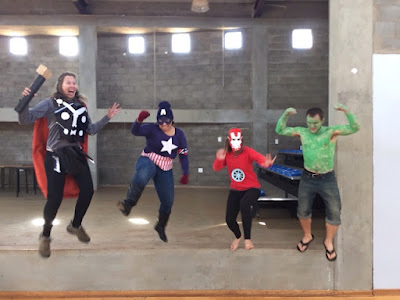 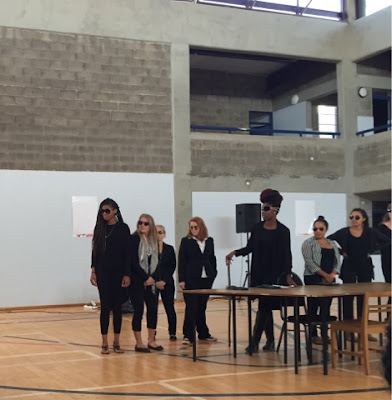 Each person was assigned a region. Lots of laughter, music, and speeches made the entire event unbelievably enjoyable! Sean and I were called closer to the beginning. After a terrible rendition of Amazing Grace we were assigned to the Lubombo region (The Hulk). After everyone was assigned, relatively evenly across the four regions, a large map was hung on the wall to show where sites were located. After investigation, our site is in northeastern Swaziland only a few miles away from Hlane Game Reserve! Close to some current PVCs, we found out the name of our community is Langa. I was given a few papers on Langa and by the looks of it we have some amazing opportunities to plug in and get started! Our homestead is a Dlamini family, so you better watch out, we are about to be royalty! I will not go into too much detail at this moment, as we will visit our site for 3 days this upcoming week. However, I will say we are excited! Most other volunteers are excited as well, and after a quick run to the store we visited with our friends back in Sihhohhweni, learned how to make chocolate and discussed the fears, possibilities, and hopes for our lives in the next two years. Back at home our sisi was relieved to find out we were not going to church tomorrow. Our sisi who is our “translator” at church is out of town this weekend, so our little sisi was deemed her replacement this afternoon while she was at choir practice. She says her English is not good. Of course she is wrong but we couldn't convince her of that. We spoke briefly about our site placement which seemed to make make a little sad. So I reminded her that we would come to visit. Also that when, make wami eMelika utoya eSwatini (my mom from America comes to Swaziland), that I will bring her to the Shabangu's home. That was met with so much delight and now make is off practicing her English for make McCord and make Collins! We have made an excellent dinner of pizza (remember it was a town day. Town day=cheese), about to call our families and tell them about our upcoming home. We will tell you more after our on-site visit! 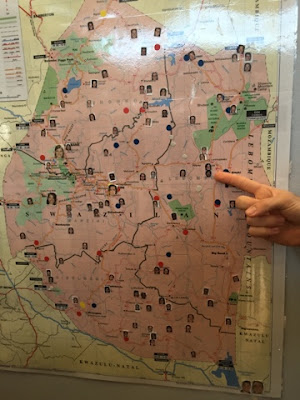 Sunday, August 2nd: Today we did sisi wetfu (our sister), Khombi, a favor. We did it unintentionally but we’ll take credit nonetheless. You see, today was the day of the big CH vs YD soccer game in Sihhohhweni, and it also happened to be the day that most of our church members, including Simiso and our pastor, were away at a youth convention. Grace and I had assured Khombi on Thursday that we would attend church before the soccer game because she seemed very distressed that nobody would be in church. Well, last night rolled around and Grace and I changed our decision and told Khombi we would not make it to church in the ekuseni. We explained that we had to be at the field and would have to leave church early and we didn't want to disturb everyone, and we continued to explain and excuse ourselves as Khombi’s shoulders slowly slumped forward. I think Grace and I were feeling a little bad about our new decision as Khombi kept repeating “You’re not coming?, You're not coming?” seemingly trying to understand what we had taken to long to explain and excuse. Finally, Khombi let out a “eesh” (the best we can tell this expresses disbelief or “that's crazy” whereas “hawu” expresses shock or “WTF”) and said she was very relieved! We said “’hawu’ we thought you were sad!”, and she said “ay no! I am relieved!” Thoroughly confused at this point and with make joining the conversation we learned that Khombi had been worried about having to translate for us since Thursday because Simiso would not be back in time. Make even said that Khombi had asked her to tell us not to come, but make felt that would be a bad lesson to teach us. Laughter obviously ensued as we realized Khombi had slumped in relief not sadness, and she was overjoyed that she would not be laughed at for translating. (Apparently although not all Swazi’s speak good English or any English at all, they can tell when someone is speaking bad English, and as Khombi says, they would laugh) We adjourned feeling better about our decision and we awoke today after sleeping in a bit ready for a soccer game. The game was a lot of fun with about 40 PCTs and 60 Sihhohhweni villagers participating in some fashion. Some bobhuti and bosisi played with us and the others got ahold of some vuvuzelas and ensured that nobody got in an afternoon nap. The field was at about a 10 degree slope and full of potholes and cowpies, but no one was deterred. The game was a blast and Grace and I left after about 2 hours with the score locked at 1 to 1. It was actually like 2-3 I'd say but the benefit of pickup soccer here is that there are no goalposts and whoever complains the most audibly about whether it was too high or not determines if it was a goal. CH ended up winning, meaning Grace’s team, and my team, the home team, ended up first loser. We left early because I had promised make I’d help cut down a banana stalk to get some bananas. I ended up doing that and removing a tin roof from there maize containers because tomorrow is corn thrashing day. As for now, Grace and I are settled in for the evening with far too many cookies to eat, so I really ought to put this down and pull my weight. Sitawukhuluma kusasa!