"Success is going from failure to failure with enthusiasm." -Mark Twain


Tuesday, July 21st: In celebration, or in my case languish, of our mock language proficiency exam tomorrow I shall tell you about our day in siSwati. Please, in no way should you be impressed. Tonight, while studying in the kitchen, our sixteen year old sisi remarked, “they sound like Letho”, who happens to be our 3 year old sisi. So it is clear that progress remains. Anyways, here it goes.
Ekuseni siye thishela Shongwe indlu. Sidadishe siSwati ne bangani wetfu. Sihambe eSIMPA ebhasini. Namuhla, sifundze HIV/AIDS futsi. Bese siye kaMahala kutsenga kudla. Sitsenge lubisi, ematamatisi, pele pele, shukela, ne emabhontjisi. Siye eSIMPA na sifunze na emavolontiya ka Peace Corps. Sime kugibela eSihhohhweni. eSihhohhweni sipheke irice, ne tibhuduo stirfry. Sisi Simiso ufundzise siSwati. Nyolo, siyanatsa litiya be siyadla no bake cookies. Lala kahle umdeni eMelika!
(This morning we went to teacher Shongwe's house. We studied siSwati with our friends. We went to SIMPA on the bus. Today we learned about HIV/AIDS again. And then, we went to Mahala to buy food. We bought milk, tomatoes, pepper, sugar, and beans. We went to SIMPA and studied with Peace Corps Volunteers. We waited to ride to Sihhohhweni. In Sihhohhweni we cooked rice and stir fry vegetables. Sister Simiso taught siSwati. Now, we are drinking tea and eating no bake cookies. Good night American family!)

Wednesday, July 22nd:  Tonight has been an awesome night! We made 75% homemade spaghetti sauce (I cheated and put in tomato paste…hence the 75%), noodles, homemade garlic bread, and not so homemade South African merlot wine. To top it all off we ate an absurd amount of lemon cream cookies (our favorite) while watching the Italian Job on our computer, thanks to our impressive collection of 250 or so odd movies. It has truly been a splendid evening, with Grace and I’s favorite sound emanating from a rainstorm on our unique roof. Yes tonight has been the best of nights, but perhaps not the best of tomorrow mornings…we shall see.
Oh yes. Today! I forgot to talk about today! Today was the epitome of frustration and misdirection. Pardon my French, but today sucked (I only say pardon my French because I still remember as a young boy in Iowa being scolded by my great aunt and great grandmother for using such a vile word…today however it is fitting). Grace and I awoke this morning full of confidence and hisses and clicks for today was our infamous Peace Corps round robin. A day in which all of our skills and training would be put to the test in a series of 8 one-on-one interviews, including the ever-daring language proficiency interview or LPI. I don't want to dig too deep into a wound which Robertson Winery has already quelled, so I will provide you with only the most minute details about the LPI.
For those of you unaware, the LPI is a test, mandated by our magnificent government, which seeks to evaluate Peace Corps trainees on their progress in learning the native language. In our case such a language is called siSiwati, and it is as foreign to the English-speakers tongue as Mandarin may be to a monkey’s. (Sorry monkeys) In any case however, one must score above or at the rank of intermediate low in order to serve in the Peace Corps void of any contract or extra agreement. For the purpose of this test, only 4 weeks in, the expectation is that we score somewhere around novice mid to novice high. Now, let me tell you my grievances with such a test. First of all it is a test to failure. You continually answer questions in a series of 5 topics (family, occupation, recreation, travel, and education) until you fail and must start again in a new topic. I understand the reasoning for the test structure but just because you may understand as well, please do not think that when in such a test, or when answering such questions, the level of stress or sense of failure is in any way mitigated by the fact that the test is designed around a participant’s failure. Secondly, the test is entirely in the hands of the individual tester, or interviewer. One may get a ridiculously easy interviewer, where the questions are equivalent to those practiced, or one may get a ridiculously difficult interviewer, where the questions are posed in any form except for those which you know. Unfortunately, such was the case for Grace and I. We had a ridiculously difficult interviewer. Once again, the wine has quelled the worst of our lamentations so I will not get into details, but I will say that Grace and I struggled equally, as did another trainee who is widely regarded as the best speaker in our group. Other trainees faired much better, or so they said, but LPI interviewer #8 proved to be the downfall of many a trainee today. Such is this life of ours I suppose. We are now prepared for the absolute worst in future testing, because we received such today. The interview given by the loathed #8 gave not even the slightest hint of following proper protocol for which Grace and I were well prepared and for which our grand government paid dearly for. No. Today was not the best of days, but it was not the worst of today's either. We will wait and see what tomorrow's LPI scores bring, and depending on the values, perhaps we will buy another box of wine.

Thursday, July 23rd: Sean got a pep talk from Make Shabangu this morning. I got a pep talk at the dinner table from Make tonight since I didn't receive one this morning. It feels good to be loved so much. So our day started and ended wonderfully. The rest of the day turned out to be one of my favorites thus far. We arrived at SIMPA and broke into 4 groups in order to travel to separate health facilities today. Sean traveled to King Sobhuza II Public Health Clinic (pictured below). His experience was one of extreme interest to me and it seemed as though the government facilities are taking a wholistic approach to health with many preventative measures being free of charge. With a focus on pre/post natal care and mother to child transfer (MTCT) the clinic sees on average 200 people per day. Free contraceptives, HIV testing, and immunization are given and mobile outreach is available. I ended up at the Population Services International (PSI), so the majority of the morning I learned all about male circumcision, condom distribution, and HIV.  PSI focuses on men's health including sexual health, HIV Testing and Counseling (HTC), and male sexual and reproductive health. With a primary focus in outreach education and testing, PSI has a success rate of 64% linking HIV positive patients to treatment, well above the national average of 37%. Onsite they preform on average 60 circumcisions per day, males ages 10-70. While early infant male circumcision is allowed and encouraged in Swaziland it is still relatively new and needs more time to become the norm. The collaborative efforts between the Ministry of Health and active NGOs is very apparent and adds greatly to their success. Again, all of these services are free of charge.  Other volunteers visited MFS- Doctors Without Borders and Family Life Association of Swaziland (FLAS). The best part about all 4 organizations is that they are excited, willing, and ready to work with PCVs. It really can't get much better than that. With a better understanding of health facilities and health care needs in Swaziland I feel like it is beginning to really sink in. These issues will be a focus for me during the next 2 years, and I cannot wait to get started! 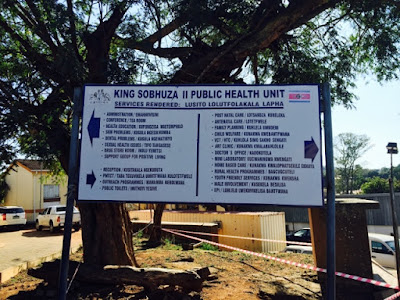 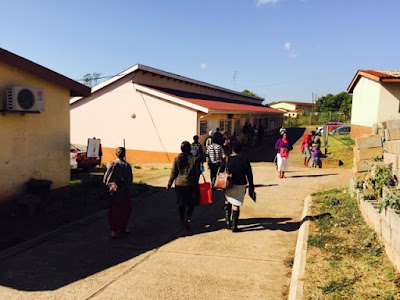 Friday, July 24th: What a way to round out the work week! Today we had the privilege of seeing and speaking with a sangoma or traditional healer. Sangoma’s have been around since the pre-Swaziland days, and their power and healing efforts are still sought after and respected today. Swaziland is a very magical place, when the Dlamini clan first united all the other clans they were only able to do so because they had superior magic. The current King and Queen Mother are both keepers of this same magic, and it awards them great power. Nonetheless, the Swazi people all have varying thoughts on magic, and because of these beliefs and concurrent doubts, sangomas can be found throughout the country curing Swazi’s of all curses and ailments save HIV/AIDS, which the sangoma we talked to said he cannot do. He sends them to hospitals instead. If you've got bad juju though, he’s your guy. Anyways, it was fascinating to see the sangoma’s dance and hear him yell (pretty sure I can call it yelling…) as he called his ancestors into his body and removed himself. You see, sangomas’ powers come from their family’s ancestors which the sangoma calls into his body. He is powerless without the ancestors, and his everyday life is largely dictated by what the ancestors want. The sangoma we visited is quite popular as we regularly hear the beating of drums and chanting at all times day and night. After the sangoma greeted us all through the ancestors and the ancestors blessed us and gave us luck, he released his ancestors and called back his spirit with more dancing and yelling. He then answered a few of our groups questions before returning to his indlu and we went on our way. It was very cold and rainy today so we were all in a pretty big hurry to get out of there and out of the elements. Post sangoma visit, we returned home with a few volunteers following, for a little belated birthday party for a volunteer that we have grown to love. In honor of the occasion I went to the sitolo and bought four different local beers to share with everyone. It was quite an interesting visit to the sitolo to say the least as I tried to both explain what I wanted and why I wanted it. No matter though, I rode the wave of laughter right out of the store all the way back home where our guests were thrilled to receive such a treat. Grace made no bake cookies and popcorn and we spent the rest of the afternoon just enjoying our friendship and hanging out. There are quite a few fans of tiny houses and western North Carolina in our little group, so perhaps we will return to the area with a few PCVs in tow. It was a blast and this weekend is set to be even better as we pack for a two day Peace Corps excursion to the Ezulwini Valley near Mbabane. In store are visits to King Sobhuza’s memorial, the national museum, a cultural village, and a game park with an overnight stay at Legends Backpackers, where we hope hot showers await! 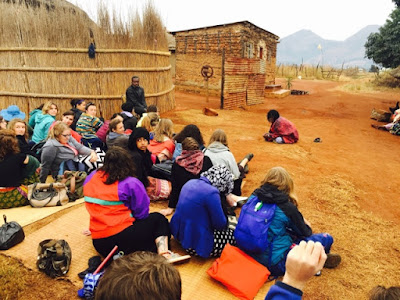